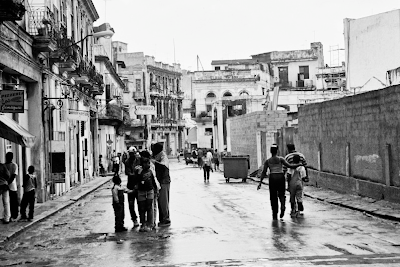 TAMARA OROZCO
There's something simultaneously lovely and haunting about this street image shot in Habana, Cuba in 2001. The streets, wet and shiny after an afternoon shower...the figures draw you into their story, as much as the backdrop they stand against. They almost seem like characters in a play, and the buildings merely a set.
Of Mexican decent / hailing from from the San Francisco Bay area / "new" New Yorker, Tamara Orozco picked up photography about ten years ago. She counts among her influences Graciela Iturbide (she is also one of my faves – this woman is beyond words), Manuel Alvarez Bravo, Roy DeCarava, Malick Sidibe, Peter Magubane, and Cloete Breytenbach.
Tamara traveled to Cuba as part of the Cuba Educational Project where she studied Cuban society, politics, and history and fundraised to take much needed medical and school supplies to different organizations on the island.
In her own words, "As a Chicana photographer from the California Bay Area now residing in Brooklyn, NY, as a grandchild of immigrant farmworkers from Mexico, as a child of political radicals of the late 1960s Mexican student movement, as someone who developed a romance with music and dance as a child, as a woman of color with a graduate degree and activist values--photography for me is this and more.... "
See more of her work here.
Posted by Christina Rodriguez at 8:35 PM

Christina Rodriguez
Oakland, CA, United States
ME: An Oakland-based art director and artist. THIS BLOG: A compilation of things that inspire me. YOU: Hopefully will be inspired too. For more info: christina@oysterstudio.com OR oysterstudio.com